Future perspectives for bicycle use in five essays

The Netherlands is on the move as a cycling country. Over the past decade, Dutch people have begun to cycle more frequently and for longer distances, including on e-bikes. More than one-quarter of all trips are made by bicycle, and there are more bicycles than people in the Netherlands. Bicycles are of great social importance: cycling is healthy, promotes social participation and bicycles are environmentally friendly transport modes. This was revealed in an infographic  and report 'Cycling and walking: the grease in our mobility chain' (2015) by the KiM Netherlands Institute for Transport Policy Analysis. In this report, KiM describes trends in bicycle use. 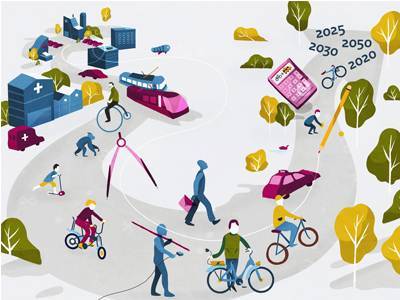 As a continuation of this research, KiM asked various experts to articulate their vision of the future for bicycles in a thought-provoking and illustrative essay. This led to five essays, each taking a different line of inquiry. The result is a variety of perspectives elucidating the future of bicycles. The topics under discussion include: the perception of bicycles, the influence of spatial planning, the bicycle’s target groups, and the effects on liveability, transport poverty, health and accessibility.

These essays present the views of the authors, who are wholly responsible for the content: the views contained therein do not reflect those of the KiM Netherlands Institute for Transport Policy Analysis or the Ministry of Infrastructure and the Environment.