Paths to a self-driving future

In the study ‘Paths to a self-driving future – Five transition steps identified’ the KiM Netherlands Institute for Transport Policy Analysis has devised two transition paths to a future traffic and transport system involving self-driving vehicles: ‘Evolution of the private car’ and ‘Sharing in bloom’. The first path, ‘Evolution of the private car’, describes a transition in which most people still prefer to own their own vehicles, and the technological possibilities for self-driving vehicles increase step-by-step and gradually come onto the market. In the ‘Sharing in bloom’ transition path, the sharing of vehicles is commonplace. For both of these paths, how fast the transitions occur is a major uncertainty, and this will not only depend on technological developments, but also on how fast self-driving vehicles actually come onto the market and if they appeal to the public. 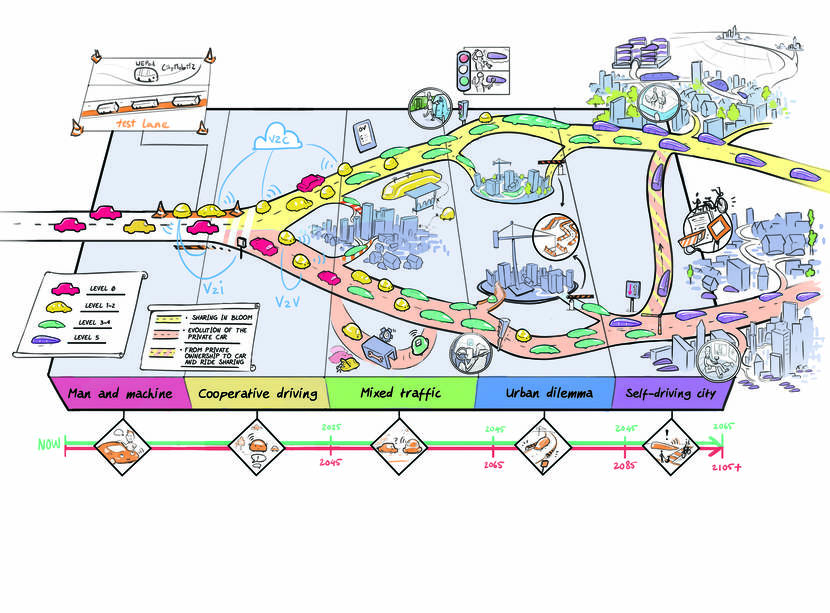 There are five steps on both transition paths in which an interplay of developments can profoundly impact the transition:

Specific policy action points were mapped for each of these transition steps, and then divided into four categories: regulation and coordination; facilitation, execution and experimentation; conducting research; monitoring and evaluation. These action points are listed in a table on the booklet’s back cover.